Meet Demetrio, a hapless servant who’s primary value is that he’s fluent in twenty languages, and Art Du’Detu, a mute kitchen servant with clever and independent mind.  These two are caught up in a great adventure when a princess slips Art a note amidst a pirate attack on their ship.

Lord Vader (Zhǔ de fùqīn) emerges like a black ghost through the billowing smoke of residual canon fire after his massive, 150-gun Imperial Chinese warship, the Star Chaser, overtakes a English rebel frigate.  The black-clad samurai is flanked by an elite fighting force of white-armored, kabuki-masked pirates called Fēngyún.  They make short work of their enemies.

Lucas Skywalker, an intrepid young farmhand living on his uncle’s sugar cane plantation on a remote island in the Pacific, wields his long-lost father’s saber in hopes of one day joining the war against the Imperial Dynasty that now rules most of Asia and Europe with an iron fist.

Nothing beats the melee of costume madness marching through the hallways of the San Diego Convention Center.  It’s like nerd Halloween… for four and a half days.

For those of you thinking of dressing up for next year, here’s a few tips to make your costume stand out:

1. Mix It Up:  Stormtroopers are a dime a dozen at Comic Con.  Princess Leias?  More than you can count.  There’s even a handful of Darth Vaders.  So what’s a Star Wars fan to do?  Start mixing and matching genres.  How about Boba Fett dressed as Elvis?  Or a medieval samurai Sith?  Ever wonder what a cowboy-steampunk-Jawa might look like?  Time to find out.

2. Dead Ringer:  Do your friends think you look like a celebrity (particularly one that has starred in a superhero, sci-fi  or cult hit)? Then you’re halfway there.  Do you have the same build as Adam West? Go find a 60’s Batman costume.  Look anything like Patrick Stewart?  Then find a wheelchair or a black and yellow onesie.  Often mistaken as Lou Ferrigno?  Eh, probably not.  Set the green paint down and put your shirt back on… quickly.

3. Out From Obscurity:  Come dressed as one of your favorite side characters,  minor villains or long-lost golden age heroes.  Don’t worry, someone will rack their brain trying to figure out who you are, and when they do, you’ll make their day.

4. D.Y.O.T (Do Your Own Thang): Why conform to The Man’s predefined, corporate, white-washed definition of superhero?  Be your own invention.  Sure you’ll get weird looks, but isn’t that how people would react to a real-life mutant with glowing green skin and a headband named Draxel Fin the Glom God of Zon? 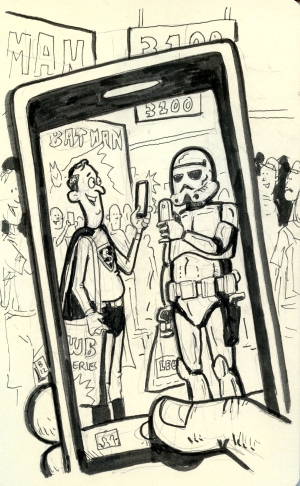 Is that Superman and a Stormtrooper taking a picture of each other?  Hells yeah.

From the toothless Bumble in “Rudolph the Red Nosed Reindeer” to the one-armed Wampas in “Star Wars” the Abominable Snowman, or Yeti, has taken many forms.  Above is my take on the ape-like cryptid said to inhabit Himalayan region of Nepal and Tibet.

I see this story as one man’s quest to find out what happened to his brother who went missing ten years before.  it would be called “The Terror at Ten-Thousand Feet.”

Was his brother killed and eaten by the savage clan of Yeti rumored to live in the region, or did he somehow use his superior intellect to enslave the man-like beasts and make them do his bidding, or did he never even climb the mountain and simply faked his death in an effort to lure his legendary mountaineering brother to his doom?

My Other Art Projects

Come Along For The RIde

Time to snap those headphones back on and get to work on the ol’ Tiger Bomb comic. #makingcomics #tiger #tigerbomb #warthog #comicbooks
Coloring an old #inktober drawing. Added some details. Surely these two are bounty hunters of some sort. #ipadpro #procreate #alien #bountyhunter #scifi #drawing #illustration
#topnine2019 consisted of bears, cats, monsters, robotics and punching. Looks like my ultimate drawing is a monster bear vs robo-cat brawl. Suggestion taken. . . #drawing #sketchbook #bestnine2019 #topnine #cat #bear #monster #fights #robot
Day 12 of the annual #drawingchallenge the #12daysofchristmasheroes from @amazingazcomics : . . What greater Christmas hero is there than Santa—the sainted gift giver to children? And what greater Christmas villain than Krampus—the vile kidnapper of young boys and girls? Here the two go face to face and fist to fist over the fate of 8 year-old Wilhelm VanDruselberg. Who will win? . . Merry Christmas one and all! . . #christmas #12daysofchristmas #santa #krampus #fight #punch
%d bloggers like this: